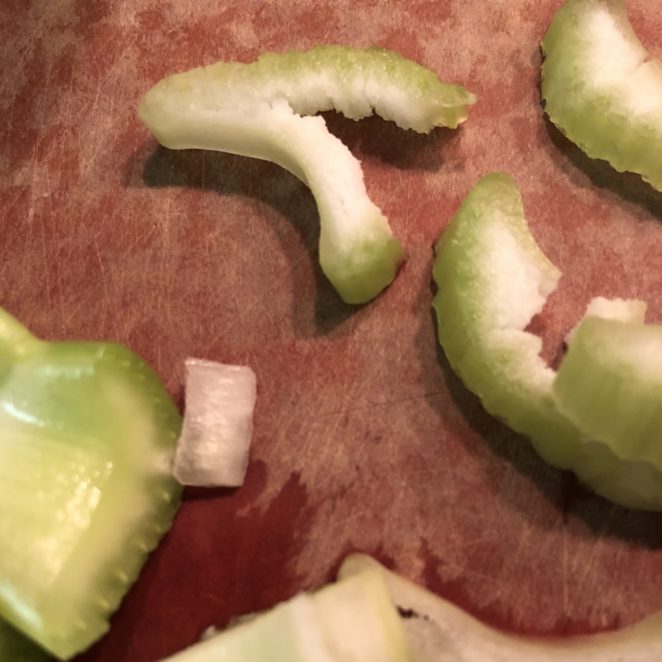 What you see: A white spongy texture and holes inside your celery stalks. They may seem hollow.
What it is: Broken-down celery tissue.
Eat or toss: Eat! Cosmetically it’s not perfect and this celery may have lost some crunch, but it’s fine to eat.

First off, not to worry. When celery stalks are white, spongy and holey at their centers, it’s not a sign that the celery is a food safety risk.

The celery does have a disorder though. Something has gone wrong and caused it to be pithy.

The white stuff is broken down tissue

The central parts of the stalks are made of large, thin-walled cells. But lots of circumstances can mess with those cells, causing them to die and dry out into the spongy, hole-y, mass you may be seeing at the center of the celery crescents you just sliced.

If you see white stuff, if the celery is hollow and if the stalks so soft they might collapse when squeezed, you’re looking at signs of “aerenchyma tissue.” In this case that aerenchyma tissue is made up of large, empty, intercellular spaces created when cells die.

Celery creates this tissue when it’s stressed by things like uneven watering, heat, cold, or an infection in the roots. Simply being over mature and old can also cause celery to develop aerenchyma tissue. (But, fun fact: some aquatic plants produce living aerenchyma tissue because the large empty spaces facilitate the movement of gases.)

Proper storage can slow the appearance of pithiness in celery

According to Principles of Horticultural Physiology, celery pithiness can be induced in the field, but doesn’t necessarily show up until after harvest. Keeping it 32 degrees Fahrenheit can delay the actual appearance of the pithiness (though consumers can’t pull this off as most fridges are between 32 and 40 degrees).

But even if the grower, shipper, grocery store and you do everything right, the pithiness may show up eventually if you don’t eat the celery soon enough. That’s because the white stuff is also an example of senescence or programmed cell death, which happens to all fruits and vegetables of a certain age.

Well, that was pithy.