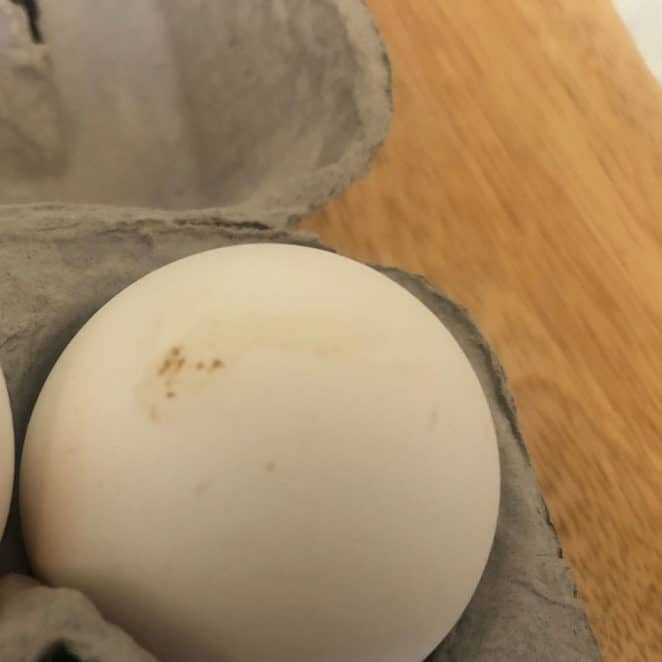 What you see: Specks of grime stuck to an egg.
What it is: Chicken feces (eww), possibly also dirt or bits of the carton.
Eat or toss: Eat! But use some caution and avoid letting the soiled areas contact surfaces in your kitchen.

So, how do you know if it’s safe to eat an egg with stuff on its shell?

When I sent a photo of this egg to poultry specialist Ken Anderson, he quickly diagnosed the dirty specks as “residue fecal material.” Gross, yes, but, don’t cancel your scramble just yet.

“Does that mean that the egg contents are bad? No, it does not,” Anderson said. “The issue here is that if you were going to go ahead and break that egg into a skillet, if some of that shell were to get into the egg or the cookie dough then you’ve got a cross-contamination issue.”

If you then cook everything thoroughly—either to the 165 degrees Fahrenheit needed to instantly kill salmonella or by keeping everything the pan above 145 for several minutes—then you still don’t have anything special to worry about. But, should you clean off the egg?

If there’s chicken poop on your eggshell, handle with care

Rather than worry about cleaning it, the quickest approach would be to just make sure that when you crack the egg, you steer clear of the dirty area and wash your hands thoroughly after disposing of the shell. You could also wipe off the egg, but only use one cloth or part of the cloth per egg and make sure to immediately put the cloth you use in the laundry. The USDA advises consumers against washing eggs at home because, without proper temperature calibration, the wash water (and any bacteria picked up from the surface) could be sucked into the egg.

Also, to minimize cross-contamination, use any eggs that look like this before the others in the carton.

While it’s possible to find a dirty egg like this sold commercially in the U.S., it’s uncommon. The USDA prescribes specific methods for washing eggs.

Washing eggs removes bacteria, but it also diminishes a natural, protective layer around the egg. Known as the cuticle, this transparent layer may have microbes on it, but it also helps prevent problematic bacteria from getting into the egg. If you’ve ever been to a country where eggs aren’t typically refrigerated, it’s likely because the eggs aren’t washed and still have the protective cuticle layer. There are pros and cons to washing or not washing and preserving the cuticle, which we talk about more in this post about what you should do if you leave your eggs out overnight.

What about fecal matter on eggs from backyard chickens?

If you’re eating eggs that haven’t been regulated by the USDA and are clearly soiled, Deana R. Jones of the U.S. National Poultry Research Center advises against giving them a water wash on your own. As mentioned above, using the wrong temperature water could make it easier for bacteria to slip into pores in the shell. Instead, Jones suggests using a paper towel or cloth to wipe off each egg, and making sure to use a different cloth or part of the cloth for each egg. Again, you’ll want to promptly put the soiled cloths in the wash.