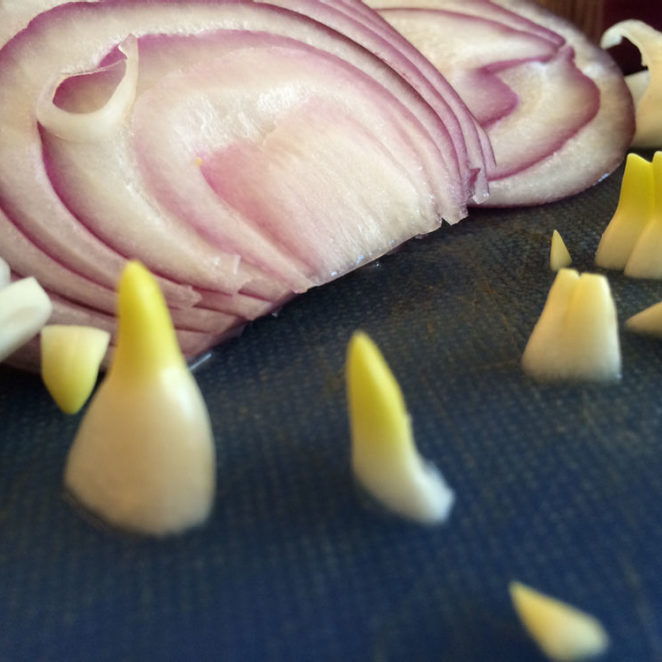 What you see: Tiny whitish, yellowish onion things falling out of your onion
What it is: The onion is sprouting!
Eat or toss: Eat!

Why does this red onion have so many little sprouts inside?

This was quite the surprise! I was innocently cutting up an onion when I turned it over and it seemed to be having…babies? Lots of little tiny onion sprout babies?

But there was no need for concern. The onion was sprouting, but it was still OK to eat. And for reasons that are simply genetic, this onion had lots and lots of sprouts!

University of Wisconsin-Madison horticulture professor Irwin Goldman explained to me that this onion had multiple “centers” (technically called “meristems”), each one capable of forming a flower stalk. I found it odd that the sprouts just fell out, but that makes sense when you consider how the various layers in an onion slip apart easily.

An onion with little sprouts will probably taste normal

Goldman said that breeders and farmers try to select for onions with a single center, but the multiple meristem trait tends to reappear, resulting in sprouty encounters like mine.

While an onion with a large sprout might lose some flavor, this onion, with its tiny sprouts, will probably taste normal. Onions typically sprout when they get cues to move on to their next life stage; age, hormones and temperature are all involved. A warm environment can prompt sprouting.