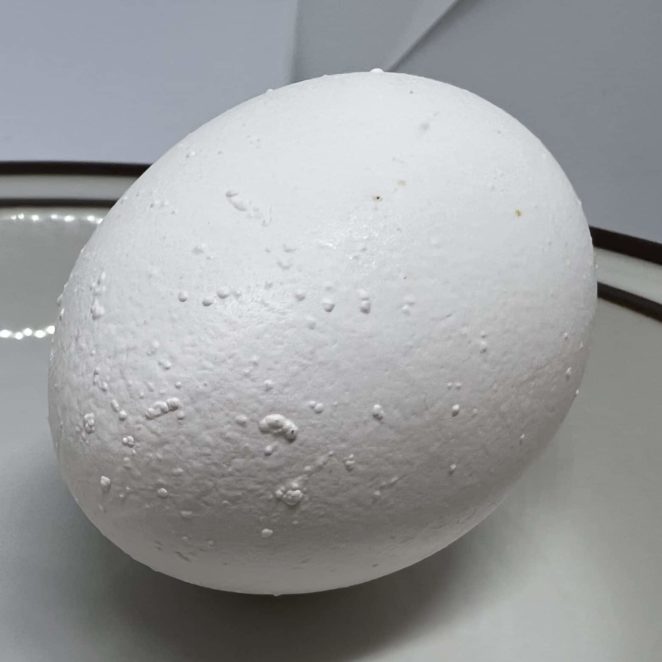 What you see: Hard, sand-like bumps or a gritty texture on your egg’s shell.
What it is: Calcium carbonate deposits.
Eat or toss: The egg is fine. Large deposits might make the shell more likely to crack if it’s jostled, but as long as the shell is intact, the yolk and white inside are just fine.

Why is it OK to eat an egg with a bumpy shell?

Eggshells are mostly made from calcium carbonate crystals, the same stuff you might find in chalk and sea shells. Normally, the shell forms a relatively smooth exterior, but, well, no one’s perfect all the time.

Take the egg pictured above. “On that particular day,” explained Kenneth Anderson, a poultry extension specialist at North Carolina State University, the chicken’s uterus “was having a bad day, and it excreted a little extra calcium carbonate crystals onto the large end of the egg.”

The bumps don’t signal that anything is wrong with the rest of the egg. In the case pictured above, they’re mainly a cosmetic imperfection. However, Anderson said, larger bumps, say big enough to catch your thumbnail, are surrounded by weaker portions of the shell, making the egg more fragile.

An egg with larger bumps isn’t a bad egg, so to speak, but it is deemed lower quality and often directed to factories that crack open eggs and process them for use in other foods. This ensures that the egg is used sooner and minimizes the chances of breakage during the additional steps involved in selling an intact egg to consumers.