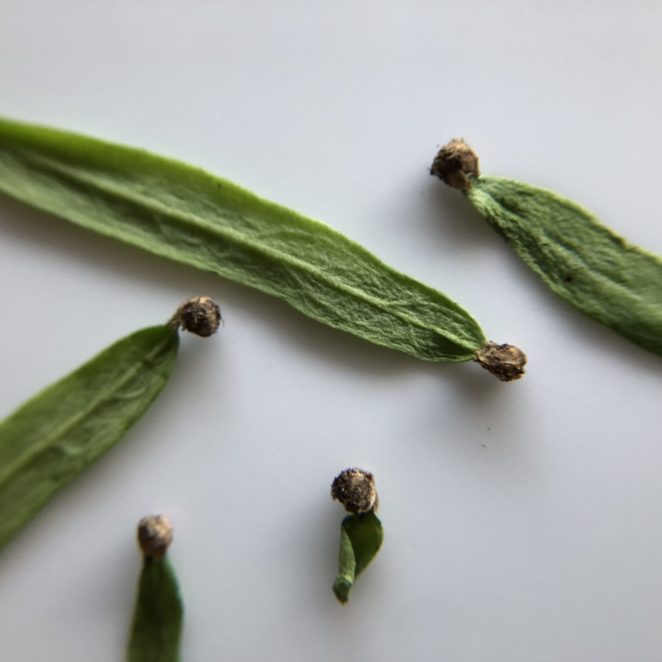 What you see: Little, round brown things in your plastic clamshell of spinach. They have a dried out, rough, papery texture and may be loose or stuck to the tips of leaves.
What it is: Spinach seeds!
Eat or toss: Pick them out if they bother you, but don’t worry about eating them.

It’s no accident that these tiny seed pellets are attached to the tips of those long, skinny leaves. Those leaves are spinach “seed leaves” or “cotyledons.”

The skinny leaves begin their lives tucked into the tight confines of the seeds and bust out and grow during sprouting. As the plant sends roots down and greenery toward the sky, it draws resources from the seed. Soon enough, the plant can manage on its own. Left behind is the seed’s protective outer coat, hooked on the tip of one of those first leaves.

For traditionally grown spinach, the force of pushing up through the soil might be enough to knock off the seed hull. If not, then rain or wind could whisk them away. Or, the cotyledon itself will wither and drop, as cotyledons do, while the round spinach leaves flourish above them (watch the cotyledons in this time-lapse video of spinach growing in soil; they emerge first, but also quickly shrivel).

Soil-grown baby spinach can spend as many as 40 days in the field. In that time, most cotyledons fall away.

But the greens pictured above grew hydroponically, in a soilless, windless, rainless greenhouse where their roots rested in nutrient-rich water. In such an environment, it’s easier for the seeds to remain attached to the slender leaves they used to contain.

With a harvest coming after 12 to 21 days of growth in the BrightFarms greenhouse where this spinach was grown, many of the starter leaves were still going strong when it came time to package the baby spinach into clamshells and send it off to stores.

With its indoor growing system, BrightFarms occasionally has issues with seed hulls making their way to consumers. The company reports on its website that the little pellets are edible and safe to eat.

“It really doesn’t happen frequently and we take quality control measures to make sure that they don’t end up in the clamshells because that’s not what people want to find,” said Marissa Arguelles, marketing director for BrightFarms, which she said is the largest indoor producer of spinach in the world.

“Spinach is one of those crops that’s really, really challenging to grow indoors,” she said. “We’re one of the few that do it.”

It’s OK to eat the husks

BrightFarms is testing different types of spinach to find those best suited to their hydroponic greenhouses. In the meantime, though, finding some stray seed hulls is merely an aesthetic problem. (Or, not a problem at all. Consider the hulls your tickets to a little extra mindfulness on how food grows.)

You can pick out the hulls or let them lend a little extra texture to your salad (when I ate this spinach in a salad, I didn’t notice them). But, don’t view the hulls as nutritional powerhouses the way you might view other edible seeds. The hulls are just what’s left after they’ve passed along their nutrients to help the rest of the plant flourish.