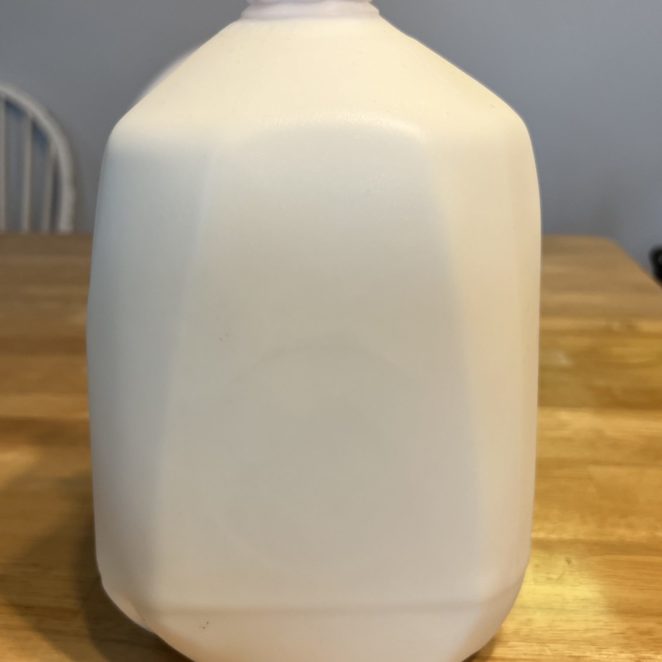 What you see/smell: Your not-so-fresh milk smells a bit off; it might even be separating or clumping
What it is: Spoiled milk!
Eat or toss: If it’s just starting to spoil, you might sneak it into a baked good, like pancakes. If the spoilage is more advanced, it’s riskier, but mostly in terms of whether the final product will taste good, though read on for some caveats. If you don’t find it appetizing, toss.

Is it OK to cook with sour milk?

One of my go-to food-waste-avoiding recipes is “sour milk pancakes.” For years, I’ve viewed funky milk as a great excuse for making a festive breakfast. I assumed (falsely, it turns out) that sour milk was simply acidic milk just a few steps away from buttermilk.

My husband and I extolled the virtues of these pancakes to friends and family. “It’s sour milk,” we always said. “Not spoiled milk”

Ewww. Ooooops….But don’t put away your pancake turner just yet.

“A true sour milk, which is a milk that has an acid flavor, is extraordinarily rare,” she said. “We have decades of data on milk spoilage types. We test milk from all over the United States…a true acidic milk is just not common overall.”

Here’s the thing – I had assumed my milk was going off because lactic acid bacteria—the one-celled culinary artists that give yogurt and fermented pickles tang–were producing their signature acid. Instead, Martin, explained, different types of spoilage bacteria, ones more likely to generate milk curdling enzymes than acid, were munching on my milk. Yogurt and pickle-making lactic acid bacteria don’t do well at refrigeration temperatures. Yogurt, for example, is best made between 108 and 112 degrees Fahrenheit, according to the Washington State University Extension.

Bacteria cause milk to smell off

So, the culprit behind that increasingly nose-crinkling smell is bacteria that loves to get funky at refrigeration temperatures.

While pasteurization kills active microbes in milk, inactive bacteria, which is clad in the protective armor of spores, survive. Dairy scientists estimate it takes more than two weeks for those spores to “wake up,” emerge from their protected state, and noticeably spoil the milk. These “spore-forming” bacteria determine shelf life. If milk spoils ahead of schedule, it’s usually because it’s been stored at too-warm temperatures or because active bacteria (as in, not spores) contaminated it after pasteurization.

Scientists call these milk yuckifiers “spoilage bacteria.” They aren’t usually the type of bacteria that cause human disease. But wow, do their enzymes do a number on the flavor of your milk.

“A lot of times there’s going to be bitter flavors. There’s going to be what we call fruity fermented flavors,” Martin said. “So the milk tastes kind of like pineapple, but not in a nice way, or rancid, which is very much like a Parmesan cheese kind of experience.”

But, hopefully you still have that pancake turner handy, because here’s the thing – it can take some time between when the milk starts to spoil to when it’s truly objectionable to use in pancakes or other baked goods. Where to draw that line comes down to your own judgment. I’ve pushed my spoiled milk pretty far and never had any issues with gross flavors in my pancakes. To avoid YuckCakes, Martin suggests simply smelling and tasting the milk before using it. A small sip will do.

“If you taste it, smell it, and it’s not objectionable to you to use that product, maybe use it up quickly.” she said. “But I wouldn’t just blindly say use spoiled milk for something else. Because I think once you taste it you might find that there’s unexpected bad things that have happened in there.”

Michael J. Miller, a food microbiology professor at the University of Illinois, said that mild milk spoilage would be more noticeable in some dishes than others.

“If you use it in such a way so you can kind of mask the off flavors, then there’s no reason not to do it,” he said. “If I use it in a mac and cheese, I won’t notice. If I used it in my bowl of cereal, I will notice.”

One thing that makes this tricky for me is that I don’t like the smell of buttermilk. In that case, Martin suggested I use that as a guideline–if it smells worse than buttermilk, all bets are off on the pancake outcome.

So far, I’m glad to report that my pancakes, which I make by doubling this recipe on SaveTheFood.com, have never had any foul flavors. They freeze nicely and are perfect freezer-to-toaster-oven breakfasts or snacks. A total win from something we might have just poured down the drain.

What are the clumps in spoiled milk?

When your milk spoils, you may see clumps forming, while the liquid becomes more clear. You’re witnessing certain milk proteins, called caseins, bunching together under the influence of those spoilage bacteria’s enzymes. The increasingly clear liquid around them contains the other major group of milk proteins, known as whey.

“So you can think of what’s happening in your fridge as uncontrolled cheesemaking by spoilage bacteria (I wouldn’t try to eat this though because spoilage bacteria also typically produce a lot of other metabolites that usually don’t taste or smell great),” Martin wrote in an email.

Heat speeds up this reaction between the enzymes and the protein, which is why a milk in earlier stages of spoilage is more likely than fresh milk to form little curds when you pour it into your coffee.

Use your nose, not your reading glasses

When assessing your milk, don’t rely on the sell-by date. First, “sell by” is an instruction to the store, not you. Second, milk often stays fresh long after that date. Third, once milk passes that date, it does not instantly spoil or become unsafe.

“There’s an incorrect assumption that once it’s past that date, there’s some sort of increased risk of food safety issues,” Martin said. “And that’s absolutely not true.”

Rather, she said, the date is designed to give consumers or the store a benchmark for when they expect the dairy product’s quality may start to change. Even that, however, can be misleading. Sometimes milk still tastes great long after that date. The point is how it tastes, not what the date says.

And it even goes in both directions. There was a time when I found that milk from my grocery store started tasting a little off before it hit the printed date. The problem, I suspect, was a refrigeration issue. Warmer temperatures could have caused the spoilage bacteria to act faster.

The bottomline: Don’t get distracted by the printed date. Researchers at Ohio State found that when study participants relied on dates rather than their senses, they wasted more milk. Your senses will save you money!

Can you get sick from drinking spoiled milk?

If you landed here because you’re wondering what happens if you drink spoiled milk the answer is: probably nothing. There are no symptoms of drinking spoiled or sour milk and no “treatment” either. That’s because the microbes spoiling the milk probably aren’t microbes that cause human disease. And every gallon of milk can behave differently based on how it’s handled and what it’s been exposed to.

Whether the milk is fresh from the cow or has been in your fridge for a couple weeks, to sicken you, it must first be contaminated by a human pathogen, which might not affect the smell or appearance of the milk. (Human pathogens feast on humans, not necessarily milk, so they may not be actively spoiling the milk, but instead laying in wait.) While contamination is rare, milk hosting a disease-causing bacteria could be well within its printed date and taste great.

Contamination could happen anywhere from the farm to your kitchen, which is why it’s important to maintain safe food handling practices at home. Keep your fridge set to 40 degrees or lower to slow or stall microbial growth. Also keep in mind that a jug of milk that’s taken in and out of the fridge a lot will be have more exposure to stray microbes in the environment and will spend more time outside of refrigeration temperatures.

“What we know about milk processing though, is that it is extraordinarily safe,” she said. “We see very, very, very few instances of pasteurized milk causing any kind of food safety issues.”

Miller agreed that the top concern with debating whether to consume milk beginning to spoil was quality. “The food safety part of this is pretty minimal,” he said.

But, he said, no matter what, the microbiological community in your milk gets larger as time goes on. There’s no hard and fast rule about the line between “eat” and “toss.”

He mused: “How far can you go before it goes beyond just tasting crappy” and may be risky? “I don’t think I know the answer to that. I don’t think anybody does.”

To err on the side of caution, make sure your fridge is set below a food-safe 40 degrees, don’t use milk in advanced states of spoiling and be careful when using milk exhibiting signs of spoilage in dishes for people who might be more vulnerable (like very small children, the elderly and people with compromised immune systems). Ultimately, act in line with your own risk tolerance. You might treat spoiling milk as you would a runny egg yolk – usually fine for those in good health, but a little riskier for the more vulnerable among us.

So, what should you do with spoiling milk?

If your milk is starting to spoil, give it a taste test and use your best judgment. And you’re always welcome at my place for Mature Milk Pancakes (working title…please suggest something better!).