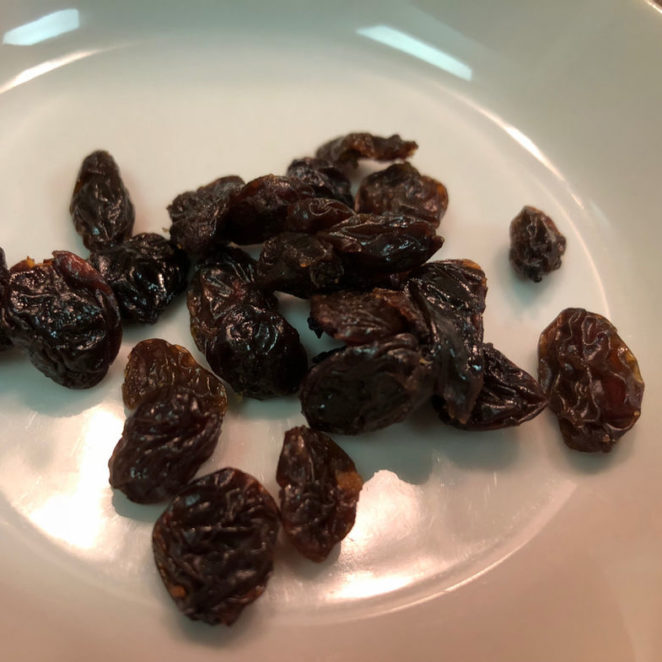 What you see: Your golden raisins are brown
What it is: Raisins that either weren’t properly treated or were kept too warm; either could cause them to brown
Eat or toss: Eat! They’re still safe and should taste fine.

You can eat golden raisins that have turned brown

For the most part, the same type of grape, known as Thompson Seedless, is used to make BOTH golden raisins and “regular” raisins. The difference comes down to how golden raisins are treated to prevent them from turning brown.

Brown raisins are literally sun dried. They are taken outside and spread on paper trays to dry, caramelize and otherwise brown in the sun.

Golden raisins, on the other hand, are protected from the sun’s bronzing rays. They travel through drying tunnels and are treated with sulfur dioxide, which kills bacteria and funguses, “bleaches” the fruit to a light color and hits pause on chemical reactions that lead to browning.

So, back to your raisins that are labeled “golden” but seem to have turned brown. Maybe they haven’t yet reached their “best by” date and you’ve kept them tightly sealed. What could have happened?

A couple scenarios are possible, said Craig Ledbetter, a research geneticist who has studied raisins at the San Joaquin Valley Agricultural Sciences Center. First, the sulfur dioxide treatment could have been poorly executed. The sulfur should have stalled reactions that normally would have caused browning. If the sulfur didn’t take hold, the browning reactions could have raced on ahead.

Or, and perhaps more likely, the raisins could have been stored somewhere too warm. Generally, higher temperatures cause chemical reactions to happen faster, and even a warm kitchen could do the trick. So, the sulfur treatment, which fades over time even in ideal conditions, could have worn off faster and the enzymes and other factors that contribute to browning in regular raisins could have acted at an accelerated rate. Thus, golden turns brown.

“I believe it’s still wholesome to eat,” Ledbetter said, “But not cosmetically perfect.”

I heard it through the grapevine….