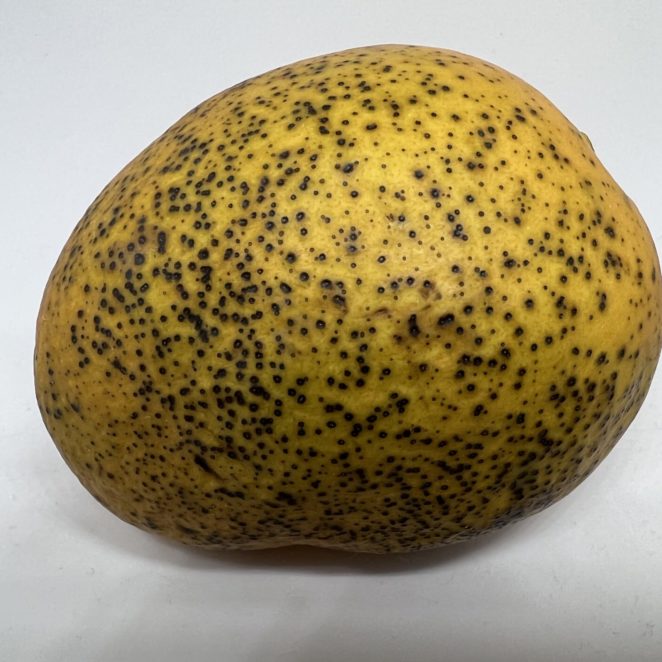 What you see: Black dots all over your mango.
What it is: Lenticel darkening!
Eat or toss: Eat! This only affects the external appearance of the mango.

Are mangos with black speckles OK to eat?

Mangos, like other fresh fruits and vegetables, are alive and “breathing” even as they rest on our countertops and in our fruit bowls.

You can’t see them inhale or exhale, but sometimes you can see little pinprick dots on their surface. Those are lenticels; oxygen, carbon dioxide and water vapor pass through them (you may have also noticed lenticels on other produce, like apples and potatoes).

Which leads us to today’s featured guests: mangos with some very dark and abundant lenticels!

If a mango is stressed, its lenticels can darken and even sink into little pockmarks as cells shrink from water loss. Scientists believe the darkening could function as a sort of mango armor to ward off threats—more on that later. But first things first: darkened lenticels are barely skin deep and don’t indicate anything wrong with the eating quality of the mango.

So, go ahead and buy spotty mangos! Other consumers might avoid them, so you could do the world a favor by putting these freckled specimens in your cart.

What causes spots on mangos?

Nearly anything that stresses a mango might lead to lenticel darkening. On the tree, that could include drought, humidity or strong winds. During harvest it could be damp conditions. While the fruit is being prepared for market, excessive rubbing or brushing on its skin might cause lenticel darkening, as could cold storage temperatures or the hot water bath required before the fruit can be exported to the United States.

The variety, which you’ll often find noted on produce stickers, makes a difference too. Tommy Atkins mangos, which are commonly sold in the U.S., are more likely to develop darker lenticels. Mangos with more lenticels, larger lenticels or less natural wax on their surfaces might be more likely to go spotty.

You may also notice dribble-shaped lines of darkened lenticels, as is pictured below.  That occurs during harvest, when an acidic latex or sap spurts out of the stem, drips down the mango and essentially causes a chemical burn. This is exactly the kind of stress that can cause lenticels to darken! By the time a “sapburned” mango reaches your kitchen, however, the “burnt” area will be safe to handle. (While we’re talking about mango sap, you may sometimes notice a different clear, sticky liquid around your mango’s stem. That clear goop oozes out after the acidic latex and won’t harm you.)

Why are the spots sunken?

“Lenticels are literally holes in the fruit epidermis,” Jeff Brecht, a professor of postharvest physiology at the University of Florida, wrote in an email. “They tend to become sunken naturally due to localized water loss.”

So, when the fruit loses water, which occurs naturally with age and in dry environments, the surrounding cells essentially sink. The degree to which the spots appear sunken will likely vary depending on the type of mango, the extent of the darkening and storage conditions. This mango is exhibiting especially large, dark, sunken lenticels:

A defensive coat of spotty armor

While scientists understand the chemical process and have identified a number of circumstances that can lead to lenticel darkening (which is also called lenticel discoloration, lenticel damage, lenticel browning or spotting), exactly why it occurs is still a mystery.

Possibly, water or other contaminants entering the lenticels triggers the response, Australian researchers have theorized. Or sap-carrying canals in the skin might leak into the lenticels, causing a sapburn-like effect that’s only apparent on the mango’s pores.

No matter what the cause, the color change signals the production of certain compounds that help protect the mango from threats.

“So lenticel darkening may be a protective response against decay-causing organisms,” Brecht wrote. “Since fruit are otherwise more susceptible to decay when they are under stress.”