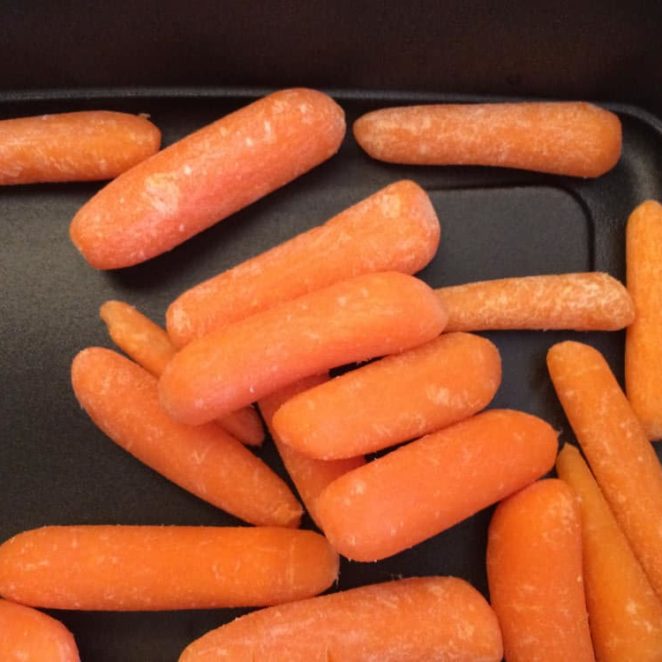 What you see: A whitish film on baby carrots.
What it is: The carrot is drying out or the carrot was physically damaged and the white stuff was its response to the injury.
Eat or toss? Eat! Both the above issues have no impact on the quality or safety of the carrots. If you want the white stuff to go away for cosmetic reasons, a water rinse or soak should do the job.

Is it safe to eat baby carrots that have turned whitish?

Ahh, the veggie tray. It served the guests faithfully, but now it’s the end of the night. Those once luscious-looking baby carrots have lost their fresh sheen and are now coated in a white film of shame. But really, should we shun them? I think just a little more care and understanding is called for.

The baby carrots we buy in stores may be, well, adorable, but they’re also a little, uh, naked. They’ve had their protective exterior buffed off, which makes them susceptible to moisture loss, which can cause their surfaces to look rough and white once they’ve been exposed to air for a little while. The white film is known as “blush” (little surprise given the indignity they suffered before they got to the store!), and is entirely harmless. It can even be removed with a water rinse.

If you find the white film doesn’t go away when you splash some water on it, it’s probably the result of some kind of physical cut or abrasion. In that case, an enzyme causes molecules called phenols to create lignin, a structural substance found in cell walls. Once that lignin is in place, you can’t get rid of the white, but it doesn’t harm the carrot at all. So go ahead and eat the sweet little crunchers.

White stuff on carrots is NOT chlorine residue

And, pretty please, don’t be fooled by a silly internet rumor saying that the white stuff is chlorine residue. It’s true that carrots are often rinsed in an FDA-regulated chlorine solution to nix bacteria. But that rinse is typically followed by a fresh water rinse, and neither has anything to do with the blushy white on your carrots.